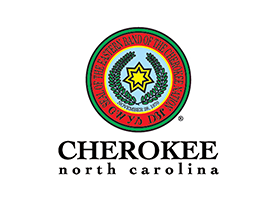 TESTIMONIAL
“It was time to consolidate our resources and unite our cultural entities and conduct an RFP for a marketing partner. We narrowed our list of prospects and send out our RFP to a dozen or so marketing agencies in the Southeast. From the moment we looked at the ads done by The Goss Agency it was obvious the “got us”. It was obvious they did their homework and knew something about our culture. Their presentation of our culture was truly striking. We looked proud and accomplish and rich with heritage and tradition in a ‘National Geographic’ sort of way. Since then, 4 years ago, the advertising has instilled a sense of pride in our people and the results have been profound from town levy to numbers at the gates of the Fairgrounds, Drama, Village and Museum.”
- Mary Jane Ferguson, Director of Marketing, The Eastern Band of Cherokee Indians

CASE HISTORY OF CRISIS
Embarking on the 2010 season, NC Tourism issued a notice reporting the results of a national travel industry survey conducted as a result of alarming gas prices on how the state would be affected from a travel and tourism perspective:

The Goss Agency acted fast as our goal and focus is our clients’ success. Not to mention, Cherokee’s marketing budget was derived from Tribal Levy, or tax on retail purchases. The agency team gathered in the conference room for a series of ½ day brain storming sessions on how to stem the problem.

SOLUTION
TGA created a pocket-sized map that looked like a passport with the Cherokee Tribal Seal. On one side was a map with all the retail/attractions by category with promotions and special offers, on the other side the historical and cultural brand romance story of the Cherokee.

Setting the stage for the launch of the Cherokee Passport to the sovereign nation Cherokee:

In typical TGA fashion we didn’t just issue a press release we released a story. A story with a hook: “Tribal Chief Michel Hicks, announces, “If you are going to the sovereign nation of Cherokee you will now need a passport.”

The Goss Agency with Cherokee Tribal officials created physical road blocks (with Cherokee Police, cones, barriers, flashing arrow highway signs) at the entrances into Cherokee from the Great Smoky Mountain National Park and Hwy. 441. Vehicles entering Cherokee were stopped by the tribe’s Warriors of AniKituhwa dressed in traditional regalia asked them for their “Passports” in the native Cherokee language. After a few moments of “interrogation” and with much laughter, the driver was issued a Cherokee Passport and told to have a good time.

As a result of the ingenuity of the event and the passport, the Asheville Citizen-Times wrote and published an editorial board column commending the Tribe on its creativity and responsible use of casino revenues.

“In 2006, the Eastern Band of Cherokee Indians was beginning to emerge as an economic force in our region, and the Tribe’s Office of Planning and Development had a strong economic development story to tell potential business recruitment prospects. Jeff and his group helped us to communicate that story with creative that was preemptive, strategically on target, and both on time and budget across the collateral, website, and trade show efforts. Additionally, the economic development campaign integrated seamlessly with the Tribe’s general market creative, and thus created synergy for the Tribe’s overall communication efforts.”
- Doug Cole, Strategic Planner, Eastern Band of Cherokee Indians

THE CHALLENGE
Renowned 55-year-old outdoor drama, Unto These Hills, tells the story of the removal of the Cherokee, the attendance was down 49%. As well, the Museum of the Cherokee Indians and Oconaluftee Indian Village visitation was down over 40%. Retail sales were off 30% and overnight stays down 23%. A survey showed very little brand awareness and virtually “0” brand recall, outside the association with Harrah’s Casino. In fact the image that did live was negative: “rubber tomahawk; run down; no place to eat; dated; social problems”. Adding to the problem, there were multiple attractions with individual budgets projecting conflicting brand imaging
and messaging. TESTIMONIAL
“I worked directly with Jeff Goss in the launching of The Disney Vacation Club, which consisted of Disney's Vero Beach Resort and Disney's Hilton Head Island Resort. It was the first time Disney had extended its brand beyond The Walt Disney World Resorts. After eight months of disappointing results in pre-occupation sales, the recommendation spearheaded by Jeff Goss to implement consumer insight programs in the north and in our Florida markets was executed. The insights led to targeted creative that leveraged the unique distinctive characteristics of the properties Disney is known for. It is a Disney policy not to give specific results. I will say the campaign far exceed expectations. Thanks, Jeff.”
- Pat Quinn, Director of Marketing,  DVC
CHALLENGE
Disney launched a new brand extension, Disney Vacation Club, to become a network of resorts located throughout the U.S. Today, Disney Vacation Club has resorts in Hilton Head, in Vero Beach, and at Walt Disney World. These resorts represent the first time Disney has moved beyond the boundaries of its theme parks. There was a major challenge with the launch of this brand extension. Disney was known for its fabulous Disney World and animation, but people didn’t know what to expect from Disney in this new venture.

SOLUTION
Jeff Goss spearheaded the creative challenge, establishing the brand extension for Disney Vacation Club as well as creating a brand image based on the cultural distinction of each individual resort. The resulting look was unique to each property, romancing the unique qualities of each location and environment yet leveraging the strength of the Disney name and the company’s many positive qualities. A unique logo, look, and messaging clearly communicated the character of these resorts. CASE HISTORY
Positioning: “A turn-of-the-century Grand Old Florida Resort experience on The Treasure Coast with all the quality and modern conveniences you’ve come to expect from Disney.” CASE HISTORY
Positioning: “A Low Country experience by Disney and no one does the Low Country like Disney.” TESTIMONIAL
“Going through the branding process has allowed us at the CVB and the community to come together and create a focused and targeted vision for our destination. We at the CVB are very excited about our future.”
- Christina Rehklau, Director of Tourism, Elizabeth City CVB TESTIMONIAL
“I would like to thank the Goss Agency and the Tourism Development Authority Staff and Board for their work in the creation of our new brand and logo. This logo will accentuate the implementation of our long term strategic plan. This plan will be instrumental in guiding us into
the future.”
- Ken Stahl, Haywood County Tourism and Development Authority Chairman

CHALLENGE
The first ever official branding campaign for the 208-year-old county. Haywood County’s 555 square miles has four small towns, none of which had appeal on their own to be a main attraction. When coupled with the other amazing cultural, outdoor, and agritourism experiences, the County had the potential to be the attraction, especially in an age with travelers, especially millennials, seeking “things real.” The Haywood County TDA hired The Goss Agency to execute its branding and marketing plan, which included visitor, stakeholder, and competitive research, brand positioning, logo/tagline, marketing plan, website,
and digital ad campaign.

RESULTS
Some highlights from the results of the
Haywood County TDA campaign: TESTIMONIAL
“This brand revitalization has contributed to an average sales increase of about 16%, according to participating merchants, and has breathed new life into the Village, providing the missing and well deserved image of an international quality leisure shopping experience with distinctive independent and national shops, restaurants, and lodging in a relaxed, historic, charming setting.”
- Curtis Williams, Biltmore Property Group

CASE HISTORY
In the late 1800s, Historic Biltmore Village was conceived by visionary millionaire George Vanderbilt and designed by the world-renowned architect Fredrick Law Olmstead as the home to the hundreds of artisans, builders, and craftsmen there for the construction of the Biltmore Estate. Today, the preserved historic village is home to over 80 independent and national shops and restaurants.

With other shopping center developments emerging around Asheville, the traffic and sales were beginning to drop. TESTIMONIAL
"There aren't many Agencies that have a perfectly-blended team of talent to consistently deliver stand-out, game changing results for clients. One such firm is The Goss Agency. Their well-honed protocol of understanding how to partner with a community to completely engage and elicit valuable insight is remarkable. And, their proficiency at seamlessly, harmoniously working across all platforms within their internal team of highly-skilled professionals is rare. The result: efficiencies were maximized, uncertainties were minimized, opportunities were discovered, and success was inevitable. The experience was phenomenal!"
- Kevin Kirby, Director of Marketing, Natchez CVB

Positioning: “The resort for the pampered and well-traveled. Where to go for the pleasures you expect when you’ve seen it all.” TESTIMONIAL
“Jeff Goss of The Goss Agency headed the creative image campaign that defined the beautiful qualities of our island. The campaign was defined through identifying what specific island attractions appealed to the various audiences. The attraction-specific ads were strategically placed in related verticals to capture the audience. Islands Magazine was so impressed with the new campaign they gave it preferred placement, inside front cover – a 20-percent premium at no additional cost. Island Tourist Board tracking indicated a 37-percent increase in inquiries.”
- Maria Fowl, Director of Marketing, The Island of St. Lucia

CASE HISTORY
Challenge: The St. Lucia Tourist Board needed to meaningfully differentiate the Island from the many islands in the Eastern Caribbean. The board was leaning toward positioning the Island as “the island with the friendliest people.”

Solution: We conducted Inside Insights© Focus Groups with travelers who had been to the Caribbean at least once and planned to visit again within the next two years. We discovered that these travelers considered “the island with the friendliest people” to be Jamaica. Different attitudinal segments favorably received two Benefit Statements, “The Authentic West Indies” and “The Island Adventure.” Both of these strategic benefits are still incorporated into the current advertising and public relations campaigns.

Results: After one year into the campaign with the new Brand Positioning, island inquiries were up 37% and visitation from the U.S. was up 18%. American Airlines added two additional roundtrip weekly flights from Miami to St. Lucia.

Depending upon media placement and benefit/feature focus of the individual ad or communication, the positioning line, “The Island That Stands Out,” promotes either the “Authentic West Indies” or “Adventure Island” positioning without compromising either one. And very importantly, in an indirect way, the positioning line references one of the most identifiable features in the Caribbean, The Piton Mountains, which happen to be in St. Lucia. This was totally under-represented and under-utilized prior to our Brand
Positioning program. TESTIMONIAL
“I have found Jeff and the Goss Agency wonderful to work with. He is the consummate professional and always delivers on what he has promised. It is also refreshing to work with someone who genuinely loves his profession and isn't just in it to promote himself or provide substandard deliverables just to make a deal.”
- Anne McCudden, Museum Director, Ah-Tah-Thi-Ki Museum